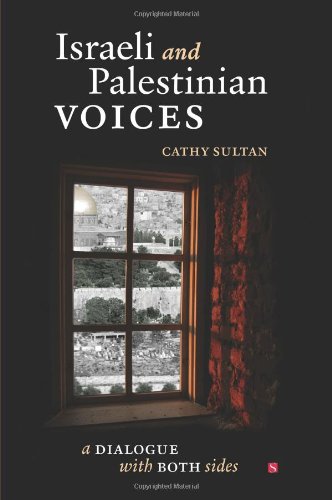 Israeli and Palestinian Voice:
a dialogue with both sides

As an American, Cathy Sultan feels enormous responsibility for being part of a political system that proclaims itself the bastion of freedom. Having lived for many years in war-torn Lebanon, she found herself dismayed by how little Americans knew about the rest of the world, and in particular, the Middle East, where the United States government spends billions of tax dollars to protect its interests.

Determined to do something about her own ignorance she precociously flew to Israel/Palestine to see for herself what the suicide bombings and illegal occupation were about.

Her on-the-ground research resulted in this unique book, Israeli and Palestinian Voices: A Dialogue with Both Sides. Sultan, asking herself what she would have wanted as a reader for an introductory book about the Israeli-Palestinian conflict, found it helpful to break the book into several distinct parts. The magnificent and painstakingly accurate interviews, which will stun readers about the realities of what people actually have to endure, are prefaced by a skillfully written account of how the indomitable housewife with artificial knees braved checkpoints, barbed wire and Merkur tanks to get her information, and followed by an objective historical primer for readers wanting to learn about the main points of the conflict’s growth to its present stand-off.

The author found herself only blocks away from a suicide bombing on her first night in Jerusalem and a few days later was shot at by Israeli soldiers manning the checkpoint into Bethlehem.

In Ramallah, in the West Bank, Sultan met Palestinians in the al-Amari refugee camp. She interviewed teenagers, teachers, a businessman, and Huwaida Araf, co-founder of the Internatinal Solidarity Movement. She visited the Old City and toured Israeli settlements. She spoke with Israeli soldiers at the Wailing Wall and spent an evening discussing politics with an Israeli Army Major. She visited with Israeli scholars and peace activists. Sultan walked down Emek Refaim Street, the sight of recent suicide bombings, understanding from her days in Beirut, the terror Israelis deal with on a daily basis.

Through Sultan’s bold interviews the reader discovers that, in fact, it is only a vocal, influential and politically powerful few who advocate exclusivity, conflict and continued injustice. The vast majority of Israelis and Palestinians stand for equality, human rights and peaceful coexistence.

“Cathy Sultan has spent years in the Middle East, raising children in the midst of Lebanon’s civil war, and her uses her linguistic and human skills to interview people whose communities may be at odds, but who are finding ways to mediate conflict in their daily lives. Their reflections and feelings take us ‘beyond the sound bites’ in the only human way possible. Not to be caught in the conflict while living through it is the greatest human achievement.”

“Standing in the shoes of those who face each other daily across this dangerous divide forces us to see beyond media stereotypes often reduced to terrorist and victim. This fast-paced narrative and compelling interviews brings to life a conflict whose complexities Americans must try to understand.”